We are definitely at the end of the snow season here in Utah.  The raw ground can be seen and the vegetation is turning green.  This too shall not last as the temperatures are beginning to soar into the 80's and so to reach the 90's.  Anyway I was struck by the bold patterns on the mountain side made by the snow.  The first image is of the entire west side of Timp.  I decided to put the rocky portion of the mountain in zones 0-2 (zone system).  In this way it would force one to look at the white patterns and not the mountain itself.  Because there is considerable zone 2 there is still sufficient detail to ridges and valleys.  In the second image I show off only one of the ridge/valley systems but have extended the zones out to 3 and a little 4.  I took the third image specifically because I liked the wishbone pattern.  I took it with a longer lens (you can see this same pattern in first image to the far left).   After today I'll have to change my focus to image that are much more green or brown and the colors of rocks.  Much more limiting.  The challenge is on. 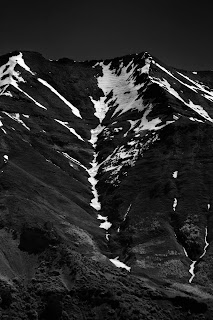 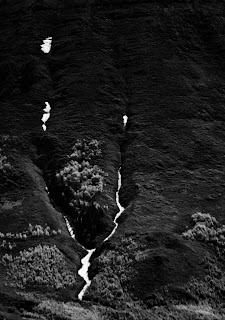